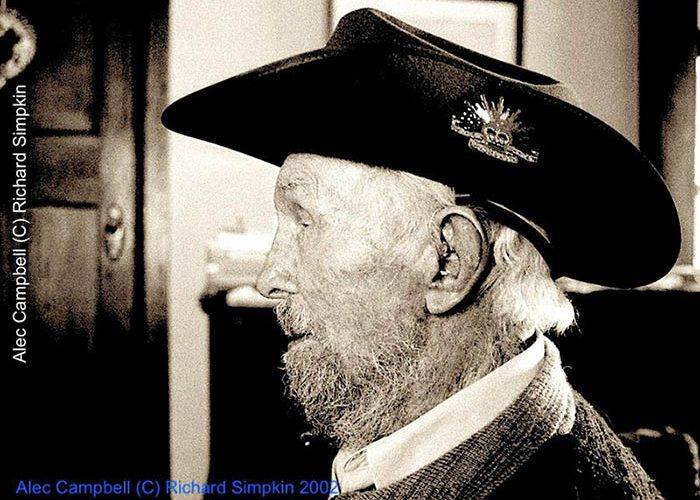 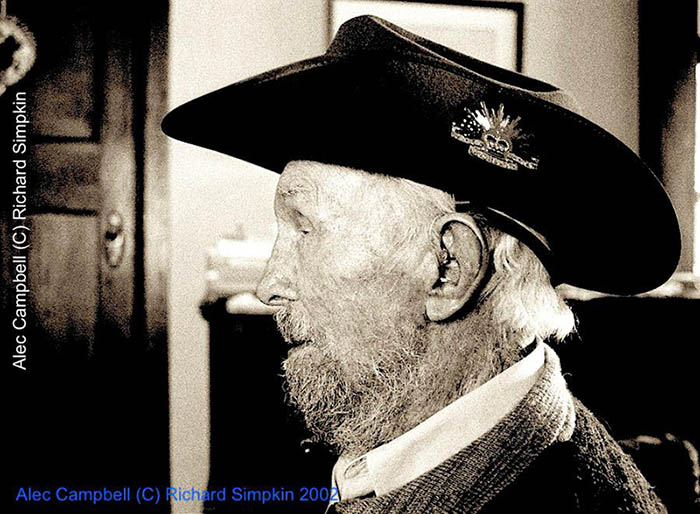 Alec Campbell was the last person to survive the battle of Gallipoli.

I was fortunate to spend two days with Alec & his wife Kathleen in February 2002 to photograph him & interview him about his incredible life.

From all the nations that enlisted, Alec Campbell became the face for all who served at Gallipoli. He didn’t want to, nor did he understand why; but history books will show that Alec William Campbell would be the last man standing that served in Gallipoli.

Alec Campbell was born on the 26th February 1899.  On 2nd July 1915 Alec reported himself to the recruiting office to sign up for the war.  Alec enjoyed riding horses, so when he went to sign up, he wanted to be in the light horse brigade, but was told there was a waiting list.  Alec thought he might miss the war, so he joined the Australian Imperial Force instead.  Alec was 16 and 4 months, but told the recruiting officers that he was 18 and four months.  After convincing the recruiting officers of his age, he now had to persuade his parents to sign a letter to give their son consent to go off to war.  On 30th June 1915, Alec’s parents signed the document.

Private A. W. Campbell, no:273, 15th Battalion, Fourth Infantry Brigade AIF, as he was now known as sailed on the 15th August 1915 aboard the SS Kyarra, arriving in Egypt where he and his mates trained in the sand dunes of Cairo.  “It was all an adventure; it was amazing to see the pyramids, camels and sand dunes.”  After training in Egypt, Alec left for the shores of Gallipoli; during his journey to the shores of Gallipoli a man sitting in front of Alec was shot by a Turkish sniper and fell to the floor of the boat.  Alec arrived already shaken in Gallipoli on October 1915.  “When we arrived there was rapid fire, you had to keep your head down or you would get shot.  I remember it being very hilly, we had to build trenches where we would fire from, most of the firing would be done from the trenches; and we would just blaze away.”

When Alec first joined the army, like many he joined for the adventure. “When I was there it was sort of an adventure in a way, because I was young you see, I was too young to think of war as a wrong thing.” Alec thought that there were some interesting things about Gallipoli.  “The Turks dress and manners were interesting, they wore long white clothes, like a nightgown; but Gallipoli was just Gallipoli. The Turks were good soldiers, very good with the rifle, if your head was above the ground you would be a goner.  Overall it was a dangerous place to be and we were glad to come home”. Alec saw just 6 weeks in Gallipoli.

On the 3rd January 1916 Private Campbell was admitted to First Australian General Hospital in Cairo.  His health had completely broken down; he spent 6 months in Cairo recovering.  He had jaundice, scabies, head lice, mumps and palsy, which permanently paralysed the right hand side of his face.  On 24th June 1916 Alec boarded the Port Sydney and headed home.  On his arrival to Tasmania he was discharged from the army on 22nd August as being medically unfit.

Alec’s life after Gallipoli was long and full, he went bush and was a jackaroo, and he spent time building houses, which gave him his strength and overall health back.  He became the Tasmanian Flyweight Boxing Champion, spent time building boats, worked on building Parliament House in Canberra; which opened in 1927.

Alec got married had children and he worked for the railways. In his 50’s Alec gained a University Degree in Economics, Alec also learnt to sail and competed in 6 Sydney to Hobart races. He remarried, had two more children, his last when he was 69 and later worked as an advisor for the heart foundation, until he was in his 80’s. After a life definitely filled to the brim, Alec William Campbell will be remembered for his services in Gallipoli.

I was lucky to meet Alec and spent two days with him and his wife Kathleen in February 2002.  I spent time interviewing and photographing him, his memory had almost gone from his days spent at Gallipoli and it’s just as well; Gallipoli was no place for anyone to fight at in 1915, especially a 16 year old boy.  Alec died on Thursday 16th May 2002.  The entire nation mourned as one. Men women and children cried, when they heard the news. Prime Minister John Howard said at Alec’s funeral “Being the last to fall Alec Campbell had become a symbol for all those young men who landed on that beach and fought that terrible war.”  In February 2002 I asked Alec “Do you feel proud to be a part of Gallipoli, “No, it never struck me to be proud, why should I be?”.  Alec embodied the true Anzac spirit; he was and always will be, our digger.

Writing A Letter For Business

A few years ago I was working on my third book which is titled; 100…